skip to main | skip to sidebar

My husband and daughter have been away for the week so I have spent some of my time freezing and canning without two more mouths to feed. I never realized how much they consume!
Frozen Beans
Frozen Tomato Sauce
Frozen Okra stew
Frozen Kale
Then a friend of mine has been away and she has a peach tree. She urged me to help myself. First year that it has produced fruit and she didn't even get to taste one. I made:
6 pints of Peach jam
4 pints of Peach chutney
Of course I'll give her some.

Tomato plants don't look so good but oddly have started to send out new shoots and flowers and have set fruit again. The Juliet and Sun Gold are loaded with fruit and the Brandywines have plum size fruit. Even the Early ripers are starting up again. The glut is over so I am happy to have fresh tomatoes as long as I can. The idea of buying them from the store is disheartening.

Some of the fall radishes are ready for harvest. I should have planted more. I wonder if it is too late. I lose a lot of my sun in the garden this time of the year.

Hop over to Daphne's to see more harvests. 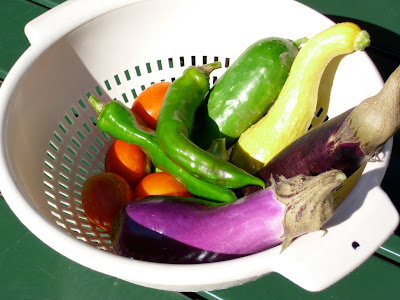 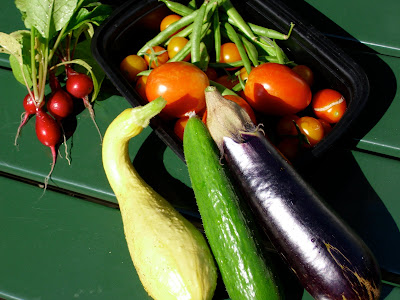 RAIN Today! I can still count the number of days of rain this summer on one hand.
Last weeks post was late so there is some overlap and I am still lazy about taking pictures. Take a look at Dahne's Harvest Monday for other great harvests.

Tomatoes are slowing down but there are a few new shoots and fruit sets on the very yellow and scraggly plants. I am not sure what is happening to them but I do not think I will have tomatoes for much longer. Also see the previous post if you have any clue what might be the issue with some of my tomatoes. 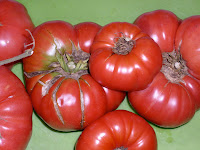 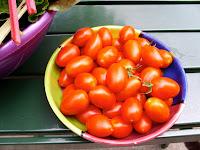 The new carrots beets and radishes are doing well. I hope they get enough sun with the new growth of the maple tree this summer. it blocks some of the late summer sun.

I continue to pick kale. Froze some and tried a new recipe of raw kale, tomato and cucumber, marinated in soy sauce and  lemon, sprinkled with toasted sunflower seeds. You can see other great recipes at Greenish Thumb Garden to Table challenge. 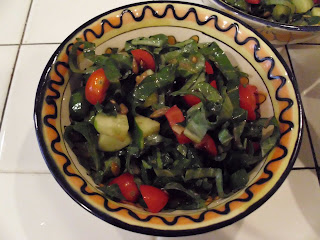 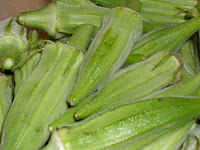 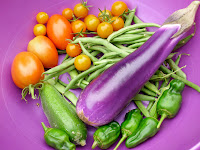 Okra has not been coming in in the amounts I thought they would. two rows of okra are not producing at all so I am left with one row of about 8 plants.

Eggplants are starting to produce in quantity but I only have 3 plants. Pole beans are also beginning to kick in. I froze a pound of them this week. Peppers are still having a little difficulty.


All of a sudden the cucumbers are starting to produce. I think the hot weather stalled them. This is a persian variety. Small, smooth, crunchy. Never tried pickling these but I might have to since I am picking 4 a day. 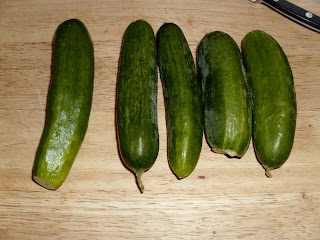 Where has the Time Gone!

Monday harvest came and went and I have just not been on top of the posting. None the less, I have been getting a variety of items from the garden and they are pictured below. Oddly, the tomatoes are being consumed and nobody is quite sick of them yet. The small ones pop in the mouth without being conscious that you are doing so. Slicing, tomato juice, and cooking with the others. Pole beans are beginning to come in regularly.  I cut back all the swiss chard and am hoping it will send out another burst of energy. I did not plant more. The kale is beautiful. and some of the eggplants are coming in. 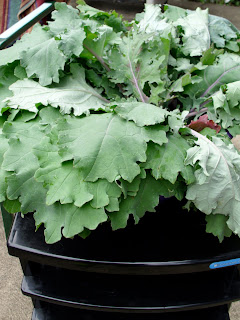 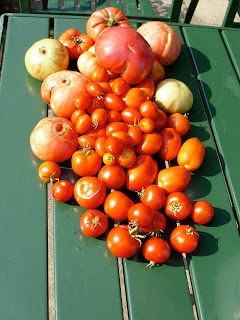 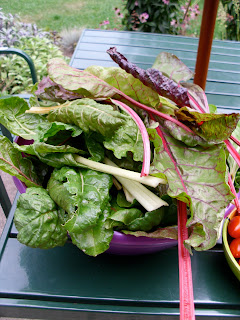 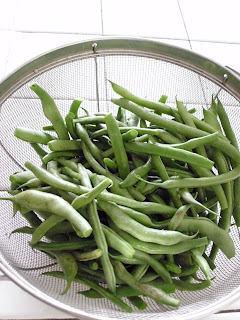 Any idea what is wrong with these tomatoes? They are mottled in color and very  mealy. I am picking them from the same exact plants that other very tasty and juicy brandywine tomatoes are being picked. If it were happening to all of them, I could understand, but only a few is perplexing. 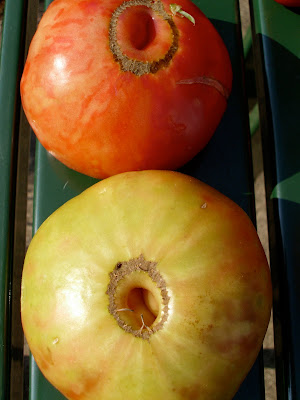 I am truly amazed at some of the garden activity and thought this would be a good time to share.
For starters, Things in the garden have not looked really well lately. The tomato leaves are turning yellow. They stopped setting fruit so I think I might only have tomatoes through August. Despite thinking the zuchini was on it's way back, it has done nothing in the last 3 weeks. Strange that it is so big, green and healthy looking. I was feeling I needed new life in the garden.

Amazing thing #1
The lettuce bed died and thought that it was time to plant another batch. My lettuce bed is directly behind the back porch and gets sun until noon–1 p.m. The previous owners of the house left a large role of fiberglass screen material in the garage. While Granny has a great system for shading her lettuce, I discovered that the screening makes a great material to protect newly planted seeds from heavy rains, sweltering heat, the sun and cats using it as a litter box. It works for a day or two after they germinate.

Nothing too amazing except that it was Monday morning when I planted the box. This morning when I went out to do my morning garden stuff, I saw that many of the seeds germinated. Two days or 48 hours seems so quick and I am just amazed that the dust like seeds, can produce these seedlings, and in time lettuce.
Here are some of the pictures. Click on the picture to enlarge. 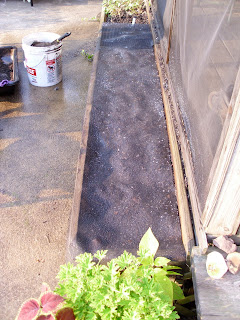 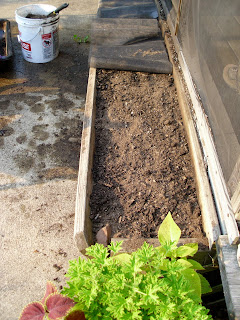 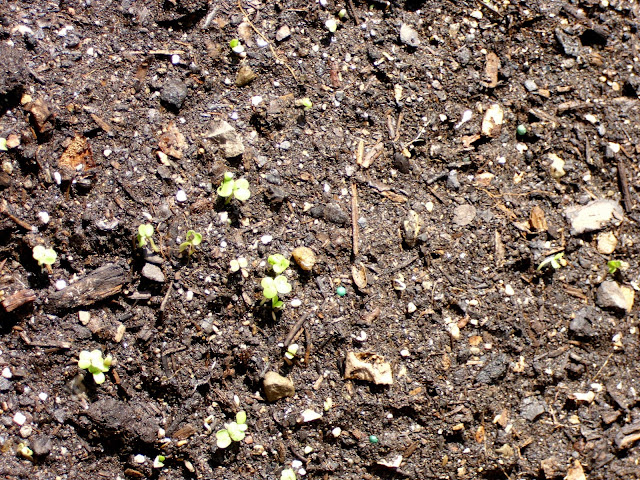 Amazing thing # 2
I don't prescribe to any specific gardening philosophy but I prefer not to use insecticides and feel that the food chain and insect world need to be kept in balance. So a few insects don't bother me. I would not call my garden organic but this year, I did not use anything besides compost in it. Sometimes it is a problem but sometimes I harvest something that is just perfect and I am shocked to see no bug bites, discoloration in the fruit, distorted shapes. How does nature make some things so perfect?

Kale leaves without a blemish. 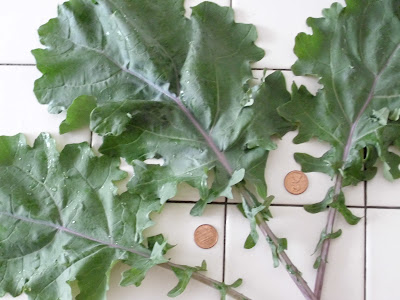 I must admit, taking pictures has gotten harder as the summer has progressed. Perhaps it is the heat, perhaps not having replaced my good camera yet. I somehow forget to take the pictures when I harvest. Today I decided to try something different.

I went out this morning, as I usually do and collected the vegetables that were ready. Lately it has been a little of this and a little of that but there always seems to be a second harvest in the evening as well. I came in, and had some fun.
The veggie guy says "Happy Harvest Monday." Check in on Other Harvests at Daphne's Dandelions. 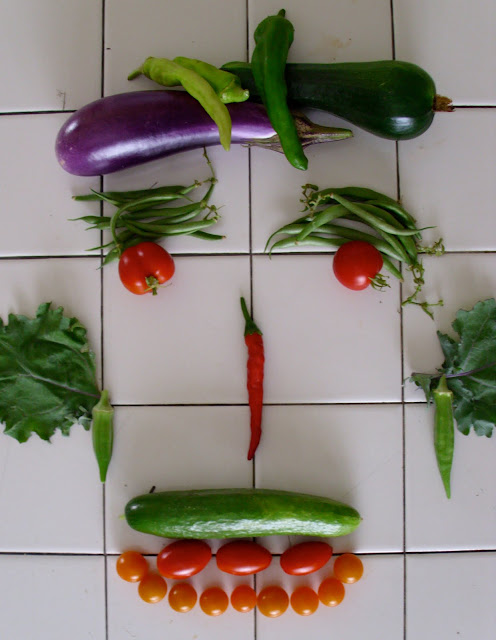 Harvest for the week include:
Okra, Cucumbers, Chili - Anaheim - Bell and ? Peppers, Eggplant, Tomatoes, Green Beans, Kale, Zucchini, Yellow Crook Neck and Mustard Greens.
Thank you to Villager for passing on the Freezer Tomato Sauce Recipe. I froze 40 oz for future use.
Posted by johanna at 4:13 AM 9 comments

I have been a little delinquent in posting and it is in part because when the days are warm, the room with the computer is very uncomfortable an we have been having a lot of those days.

A few things to catch up on:

I guess it started with a call to show off your sunflowers by mama pea.  I love my sunflowers but mainly because of the story behind them. When we first moved in and we landscaped to put the veg garden in, I took my daughter seed shopping with me. I asked her to pick something she wanted to plant. I thought she would pick peas or beans, even broccoli but instead she picked sunflowers. I cringed at the idea of giving up precious space in my veg garden for these tall monster flowers. I planted them at the edge of the garden by the garage and have to admit they were beautiful and a wonderful addition to the garden the first year. They have returned every year and now have filled in the "dead" spot between the garden and the garage. I am forever grateful to my daughter for asking me to buy those seeds.
The show:

The second picture is a flower that is 10' high by the garage. The two on the right are from a dwarf sunflower 4' high with 10" diameter bloom.


Then came the refrigerator challenge that was put out by Erin followed by Granny. Forget it! It is not going to happen. I pride myself in keeping the garden up not the refrigerator. I had no idea that people connected the two.

Somehow, a swallowtail butterfly managed to escape my search and look at her. She was not far from going off to make her cocoon when i shot this two days ago. This morning I can't find her anywhere. 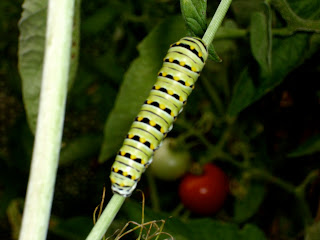 Some of my other eggplants are beginning to produce. I am excited for a new vegetable. 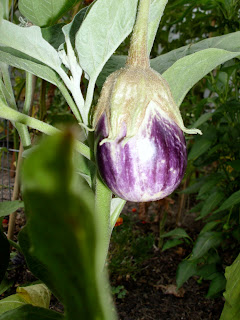 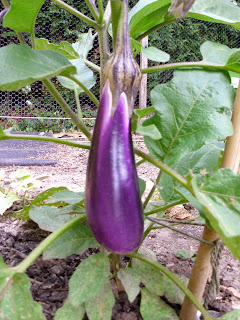 Listing for my own future reference, the harvests have been as follows:
Lots of tomatoes, I will pick most of the Romas this weekend for canning.
Cucumbers but not as many as I would like, I planted a variety that cannot be pickled so I guess that is good.
Peppers not coming in as they should. A burst of chills in the early season but very few now. Bells may be starting, plus a few Anaheims.
Kale, swiss chard slowing down in the heat.
Eggplant, ichiban have stalled but some fruit coming up on new plants.
Okra beginning to produce regularly
Squash slowed down in the last two weeks but may start up again.
Posted by johanna at 10:09 AM 7 comments

I was checking my fellow bloggers posts before I was going to post today. Low and behold, Robin over at Gardener of Eden posted exactly what I was going to. So go on over there and take a look. I am posting so that I have my own record of the delayed producing pole beans.
Posted by johanna at 7:32 AM 2 comments

johanna
A designer, mother and creator. I love to see things grow and develop. I love the craft of good work and living off the land. Zone 6-7