skip to main | skip to sidebar

Butterflies, Radishes, Peppers and So Much More

I have begun to track the life of a swallow tail butterfly on my fennel plants.
On May 21st a swallow tail laid eggs on one of my fennel plants. Experience from last year tells me that these eggs will not make it because it is too early in the season. None the less I will continue to track it for everyone to see. The picture on the left was taken right after I witnessed the eggs being laid on May 21. On the right is the first Instar caterpillar stage. The egg hatched in the last 24 hours. Egg stage was 5 days. 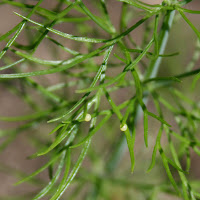 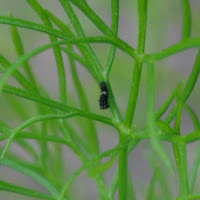 I have been so curious about the radishes that I had to take a closer look and low and behold!… I must confess, my daughter was excited and talked me into pulling 4 of them out. I don't think that she really ever had a radish. Daughter and husband had one and I had two. i must say, they tasted really good and I am not really fond of raw radishes. We will pull some more out when my father comes to visit this weekend. 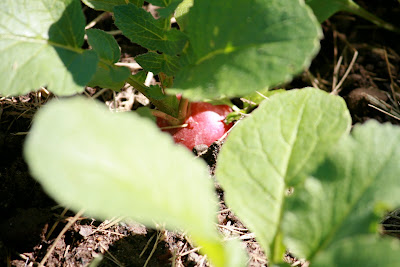 I have found the first official fruit on one of my pepper plants. This is one of the few plants that I did not start from seed. It is a padron pepper. On the other hand, someone has been eating my Anaheim pepper. Who could this be??? 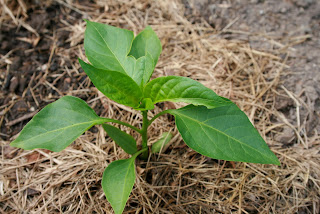 New to Harvest Monday listed on Daphne's site  but I am excited to join the group. Thank you for doing this. It gives me a specific mission for the week. Can't wait till next week when I am a little more prepared.
Thinned radishes, Chamomile, lettuce and Mustard.

Now comes the hard part.
I sit and wait for more stuff to happen. Flowers are on the tomatoes. The crook neck squash have fruit on them and I am hoping for male flowers to open for pollination. 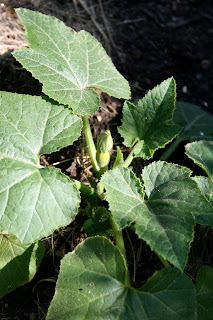 Swiss chard is beginning to leap and I should be able to harvest some leaves in less than two weeks. This picture was from yesterday and today, it feels twice as big.
My chamomile is like a weed and ready to harvest. As long as I leave a few flowers on the plant it will reseed and plants will come up in a few weeks. These are in my daughter's plot and they make for a wonderful ladybug and butterfly stop. 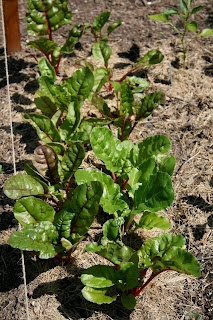 My daughter planted two turnips - (not sure why). I can see the beginning of the bulbs surfacing. It seems so early but I will be so happy to have a root vegetable. The leaves look beautiful. This is the first year for my purple iris and it is just as gorgeous as the yellow ones which you can reference here. 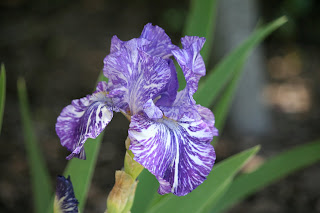 Lastly, the other cat must make an appearance. Perched on the edge and always ready to pounce on a butterfly. If she could only keep the moles away. 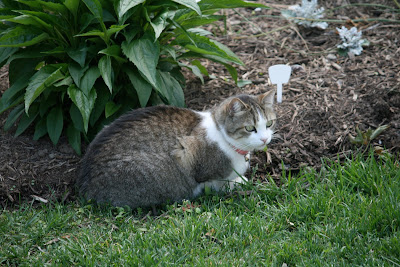 The Carrots have Germinated

So excited by all the stuff that is in and beginning to pop. Everything is in accept for a plant or two. So I feel that I am officially cataloguing the contents of the garden.

The garden is divided into 11 smaller plots. i refer to them by numbers except for my daughter's plot. Some of the plots get a little too much shade from a tree that has almost doubled in size in the last three years. PSEG trimmed some branches that were in the way of the wires and this forced it to sprout up. It is not our tree and I think I will be heading out there with a clipper or saw to remove some of the branches. Along the back from left are one, two, three. The middle is four, five, six and the most forward is seven, eight, (daughter's plot) and nine. 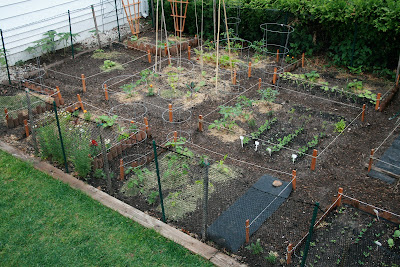 The last two plots can be seen below. The plot on the top is divided into two: ten-a and ten-b. The plot on the bottom is eleven. These are the two plots that get a lot of shade. Plot ten has mainly root vegetables and brussel sprouts. 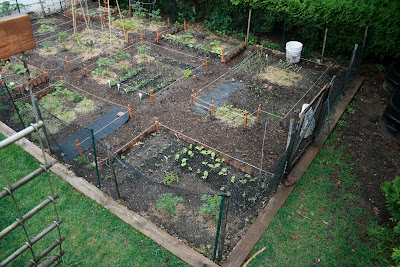 The excitement for the day is the following:
The carrots have germinated. Can you see them? I had to thin the radishes and this is what I pulled out. I am so excited since all I got last year were beautiful leaves from my radishes. Aren't these precious? 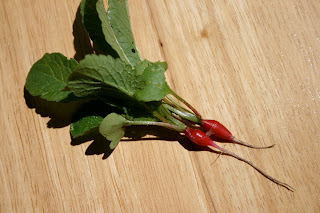 The garden is almost all planted and slowly things are beginning to happen.
I seeded way too many tomatoes and will have many plants to give away. I need to expand my varieties for next year.

Still harvesting lettuce and that will be it for a little while.
Peas are beginning to poke out of the ground and sticks are in place for the climb. 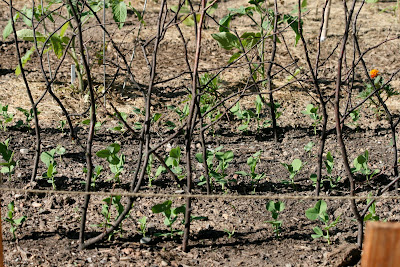 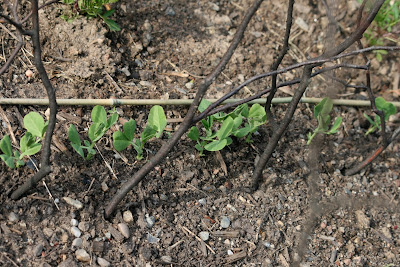 Perhaps one of the most satisfying things in my garden are the yellow iris. They have multiplied from one flower to the multitude of blooms you see here. Iris are by far one of my favorite flowers regardless of their short life and often alien forms. 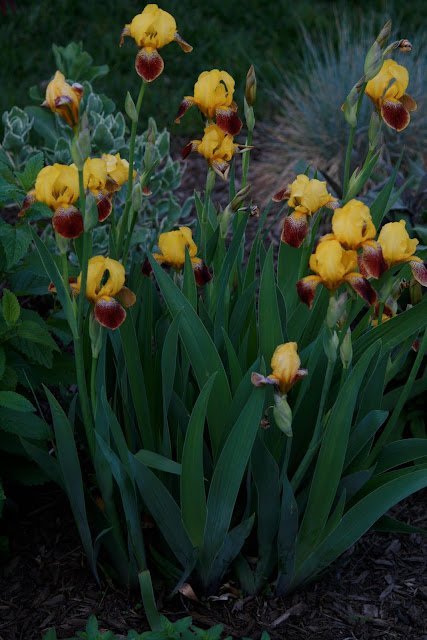 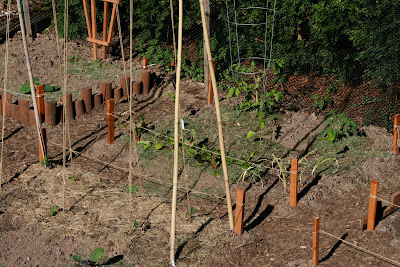 First, First.
My daughter has requested her own plot in the bigger garden plot. Perhaps her interest and passion will grow as she tends her garden.


The cat, on the other hand, loves the garden and I never have to ask for him to follow me to play in the dirt.

First Lettuce.
We had a green salad from the garden yesterday. The leaves are nice to pick and the lettuce is sweet. 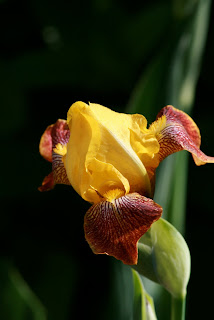 First Iris.
The iris have begun to bloom. I love how this one has those deep red veins which contrast with the yellow. 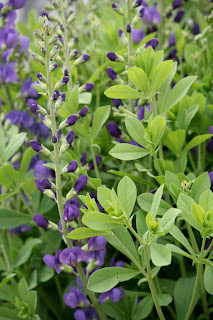 The Babtista is beginning to bloom. this plant is magical when it is in full bloom. Look for full bloom pictures in the next two weeks.
Posted by johanna at 8:57 AM 0 comments

The weather has been so inconsistent. 55° one day, 90° the next, torrential thunderstorms the next.

None the less, things are beginning to happen. The compost is about to be turned.

Seeds planted 8-10 days ago are beginning to pop up out of the ground.
Radishes and pole bean 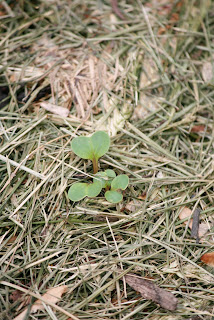 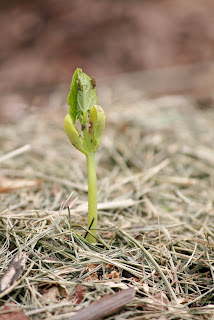 johanna
A designer, mother and creator. I love to see things grow and develop. I love the craft of good work and living off the land. Zone 6-7